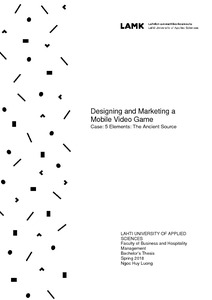 The video game is a concept which was announced in the technology-developing era of the 90s. Since then, the video game, which applies both to the idea and computer technology behind it, has become a unique way of entertainment. Due to the significant development of technology and its applications in different sections of society, in this decade, the video game brings more benefits than just being an entertainment tool. Moreover, the video game industry is predicted to be extensively developed shortly. The traditional entertainment media has already been widely acknowledged; however, the video game is something new and entirely different from other entertainment. Because of the development of mobile technology, the mobile game, nowadays, becomes the essential application in every mobile phone all over the world.
The thesis aims to understand how mobile video games could gain more users, to analyze different features of well-known game titles and to show how adding game features relates to the business. Next, by analyzing data, this thesis introduces a case study, 5 Elements: The Ancient Source, and uses it as a blueprint for mobile game designing. After that, this thesis is going to point out some marketing strategies that the case company has used in launching this game on the market.
The data of this thesis is mostly collected from available books and research from the internet. Some other data is received from trusted newspapers from many different countries. The data is analyzed based on the investigations of specialists from related studies and by the knowledge of the author. However, due to the limitations of this study, further research is needed.