Motives of a film tourist - Case: Game of Thrones 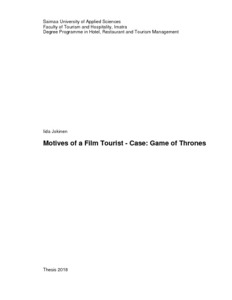 The theoretical part describes the concept of film tourism, its history and types of film tourism and film tourists as well as introduces the case study subject Game of Thrones and film tourism related to it. In addition, motivation theories used in tourism are discussed and the continuum of film-induced motivation, which was used in this thesis, is introduced. A quantitative method was used for the data collection in the empirical part. An online survey was distributed through several social media channels to reach the target group, Game of Thrones film tourists.

The response rate to the survey was very low and thus the results achieved in this thesis cannot be generalised in any way. Caution should be exercised when interpreting them. The findings do, however, offer some direction into what may motivate film tourists. The participants identified different motivations for different film tourism activities. The motivations also varied between fans of the series and those who were not fans. The main push motivations for film tourism among those who are fans of the film were found to be curiosity, relaxation, fantasy, and novelty. For non-fans, the research suggests curiosity and education as the primary push motivations. The primary pull motivations for fans, on the other hand, were theme, scenery, plot, landscapes, genre, and venue. For non-fans, they were genre, scenery, and landscapes. The findings also suggested that film tourism happens both as the primary purpose and as a part of a holiday or other trip. In addition, the research suggests that what film tourists get out of film tourism depends on the individual and what they expected from it and what motivated them to participate in it.