Creating API Test Automation of a Service for Company X 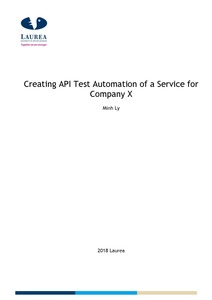 In project management, Agile is an incremental model, which is based on an iterative research and development method. As a result, multiple projects can be run simultaneously and they are divided into several segments to be used and changed according to the customers’ planned requests. Of particular concern was that there was not any API test automation (TA) for shared services in company X.

The purpose of this thesis was to apply TA for a shared service called Area of the company and support their software TA workflow. In each deployment environment, this TA has been run to ensure that API endpoints have been called, responded and executed with results.

The objectives were to define a proper process for establishing, building and validating a TA environment. Thanks to the technical features included in enterprise editions of the applications such as JIRA, Bitbucket, Bamboo, Octopus and Confluence, all objectives were planned and finished successfully. API test automation was passed and test cases were documented on the system of company X. Therefore, the developers and Quality Assurance engineers have had opportunities to improve and develop features further. The knowledge base of this study was concentrated on API test automation and multiple functions of other technology components, which were used to structure a testing environment.

In this thesis, API test automation has followed the principals in X’s Quality Assurance procedures. The test results have been verified by two different employees, including at least one software QA engineer. The Agile model was used as a research and development method, and JavaScript programming language, as well as Jasmine test framework were used. The test automation can be extended, tailored and developed further based on the company's needs.