Organizing and implementing an event as a fundraising strategy : case: VCEA Ry 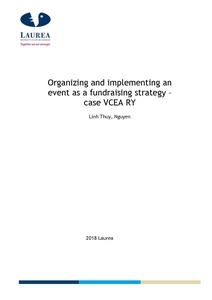 This thesis gives an overview of the organization and implementation process of an event that was used for raising awareness and generating fund for a charity campaign. The event, Vietnamese Cultural Show, was commissioned by the Vietnamese Cultural Exchange Association Ry- a non-profit association based in Helsinki and was apart of the joint project “Build Schools for Vietnamese Ethnic Minority Children”.

The objective of the thesis is to learn how a non-profit organization can run a fund-raising campaign and organize an event successfully as well as give recommendations for VCEA, contributing to the better development of the VCEA’s future event and co-operation project.

Both used quantitative and qualitative methods were described in the thesis. Feed-back forms given out during the event were to find out about guests’ feeling of the Vietnamese Cultural Show activities and the attitude toward a fundraising campaign. Self-observation explains opinions from the VCEA’s members and volunteers on the management and implementation of the event and project.

This thesis report is divided into seven parts, starting with the introduction of the project background explaining the aim and objectives of the event and project. The second and third section is the theoretical framework, which consists of fundraising strategy and the event planning and management at every main stage. Followed is the research methodology to be used in the paper. The fifth part is about the explanation of how the Vietnamese Cultural Show was implemented in some main areas throughout the project timeline and the result of the charity project. The survey result and analysis of the event are stated in part six. The last section of the thesis covers the summary of the paper, the evaluation and the suggestions for enhancement of VCEA's events or projects in the future. This paper was written in the perspective of the author who was the project manager, event organizer, and implementation officer at every stage of the project from the beginning.