Assessing the sources of competitiveness of the US states 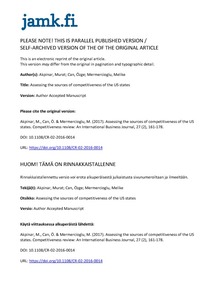 Parallel published_Assessing the sources of competitiveness of the US St.pdf (421.7Kt)
Lataukset:

Purpose: This study aims to test the emerald model on the regional basis for the identification of the most important sources of competitiveness in the states of the US.
Design/methodology/approach Using the emerald model and its assertions, data are collected over the period 1998-2013 from 47 states in the US. Multiple regression analysis is performed with a lag structure of four, six and eight years as alternative time intervals to explain the dependent variable.