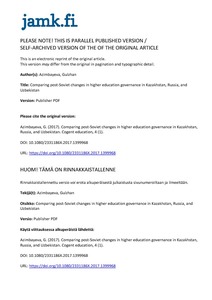 This paper argues that during the perestroika period the institutionalized context of the Soviet higher education governance was transformed dramatically, and has attempted to explain the outcomes for higher education from the perestroika period and proposed the theory of “institutional dis/continuities”. The theory employs elements of historical institutionalism in the explanation of higher education governance changes during the Soviet and post-Soviet periods in the countries under review, Kazakhstan, Russia, and Uzbekistan. Historical institutionalism addresses the institutional changes in historical development. The changes are explained by “critical junctures”. Therefore, the perestroika period is seen as a critical juncture in this paper. They may be caused by times of great uncertainty. The changes were dramatic in spite of the short timeframe. This critical juncture period is identifiable subject to a reference to the Soviet period.