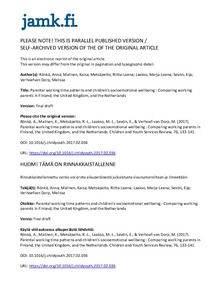 This cross-national study examined the connections between parental working time patterns (i.e., regular day work vs. nonstandard working hours) and children's socio-emotional wellbeing defined in terms of internalizing and externalizing problems and prosocial behavior. We also examined how the total number of hours worked, changes in work schedules, working overtime at short notice, and having an influence over one's work schedules were linked with children's wellbeing. Data were collected by a web survey from Finnish (n = 358), Dutch (n = 200) and British (n = 267) parents with children aged 3 to 12 years. The results showed, that in all three countries parents working nonstandard hours reported more internalizing problems among their children compared to parents in regular day work. In addition, parents whose work included overtime at short notice reported more internalizing problems among their children compared to parents who did not work overtime. Parental nonstandard working time was related to lowered prosocial behavior in children, as reported by parents, but only in the United Kingdom. Overall, the findings of this cross-national study indicated a universal, although weak association between nonstandard working hours and higher child internalizing problems. However, flexible arrangements both in working life and daycare services may help to promote children's socioemotional wellbeing — such as prosocial behaviors - in families where parents work nonstandard times.