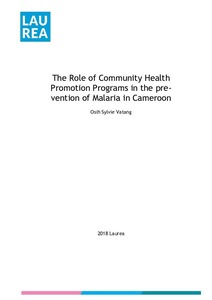 Malaria accounts for 22% of deaths that occur in health care facilities in Cameroon. Despite 66% reduction in mortality caused by malaria between the year 2000 and 2015, malaria still remains a major health issue in Cameroon with 45% of deaths of children under five linked to malaria. Cameroon has both tropical and equatorial climates hence favouring the breeding of mosquitoes.

The purpose of this thesis was to describe the role of health promotion programmes in the prevention of malaria. The research question was: What is the role of health promotion program in the preventing malaria in Cameroon. To achieve this, a literature review was carried out. EBSCOhost, PubMed and science direct academic data bases were used in searching data. Article search was done using search words related to the research question and other keywords. The search resulted to 10 articles after subjecting the entire 760 articles through an inclusion and exclusion criteria. These 10 articles were further appraised using the CASP critical appraisal tool. The collected data was analyzed through inductive content analysis.

Three major themes emerged from the findings, imparting knowledge on the community to address health issues, Changing the Perceptions of the People about the Preventive Methods and addressing the challenges in Preventing Malaria. Health promotion programmes designed for the prevention of malaraia were grouped under these areas. Despite the challenges encountered by health promoters in effecting these programmes, there was still an impact created by these programmes. Recommendations were made for further research on the effectiveness of health promotion programmes for better implementation by health promoters.