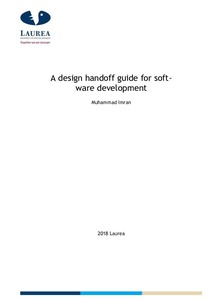 In order to build a consistent and aesthetically pleasing user interface, communication between developers and designers is vital. This thesis project utilizes action research to show how a design handoff checklist can improve the communication between developers and designers and therefore the efficiency of the entire development process. This required the creation of a design hand off checklist that was then implemented to the development team to see whether it made the development process more efficient. The experiment was conducted in collaboration with a Finnish software company developing a survey tool. Due to confidentiality, the company name is not mentioned in the thesis.

The design handoff checklist was extremely successful. Interview results showed that both designers and developers benefited from the use of the checklist. The development process became more efficient as communication was improved and repetition of work was decreased. 89% of the development team believed that the checklist made their work easier. The designers complained about the extra work caused by the careful planning of the handoff document, but 50% of the design team still agreed that with this extra effort, work didn’t need to be repeated and designs came out as originally intended.

The thesis contains six parts. First, the company and ongoing project along with the thesis objectives are laid out in the introduction. The second chapter gives an overview of the theoretical background in the matter of design handoff. The third chapter explains the research methods utilized in the thesis project and the fourth chapter presents how the checklist came together based on the literature survey and research within the company. The fifth chapter then presents the results of the experiment by analyzing interviews conducted after the implementation of the design handoff checklist. Finally, the sixth chapter concludes the thesis.