Student authentication framework for Online exams outside of school 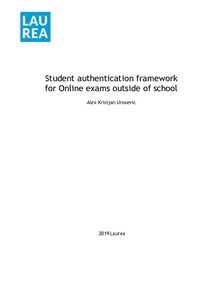 This research projects aim was to find out how institutions can ensure correct identity when exams are done outside of school. The end user was focused on Laurea University of Applied Sciences upcoming full online implementation programme. Throughout the literature review, various authentication methods were gone through, such as: pin code, facial recognition, voice, keystroke, fingerprint, profile-based authentication, as well as hand geometry based recognition. The interviews were conducted using the semi-structured interviews approach, and the outcomes were analysed through thematic analysis. Three interviews were conducted at the Laurea University of Applied Sciences, with the focus group of interviewees having basic and/or fundamental knowledge in IT and authentication in general. The interviewee answers differed from those researched in the literature review to some extent; however, each received was somehow linked to one of the main topics of interest within student identity recognition. The most common topics of the thematic analysis allowed the researcher to identify key concepts and ideas that can be used later in maximizing not only security, but maintaining a peaceful environment for end users to complete exams. Certain trends were pointed out throughout the interviews, the main ones being: biometrics, security, data protection as well as two-layer authentication. Other key points, such as continuous authentication were mentioned, however, linked to for example two-layer authentication hand in hand. With technology advancing and changes being made each day onward, the use of mutli-factor authentication is highly important in order for the adaption to new scenes being made. If one method were to change drastically, the use of another method branching off can work until the other one is stable again. Having various options instead of one is the key to success when it comes to authentication and student identity recognition. With Finland having high tech institutions and good funding from the government, the transition to e-learning and online exams is something that is coming up at a rapid pace and is in good hands. Based on these findings, some recommendations can be made for the school when considering which approaches and methods to take. Keeping it simple, using two-layer authentication and obeying the general data protection regulations (GDPR) is the right path to take.