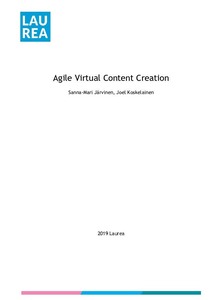 The purpose of this thesis project was to find a flexible, usable and efficient way to create virtual course content for the Media Elements course of Laurea University of Applied Sciences. The objective was to start the creation process for a virtual implementation. The course had previously been merely based on contact sessions.

The development tasks were to research and test the best suitable and agile method for virtual content creation. The tasks were to create the first virtual course content prototypes such as video tutorials and a suitable platform for them. The images used in the tutorials were taken by the development team itself and screen captures used were purely for educational purposes.

The knowledge base was gathered by comparing (benchmarking) virtual courses that have been found successful, by researching market leading professionals in the virtual content creation field and benchmarking available tools and environments. Previous expertise on Adobe products, Scrum sprint method and other related skills were utilized and improved in the process. Collected user interviews also gave additional information.

The development method used in this project was the Scrum framework. The Scrum sprint process began by interviewing users about their earlier user experience on virtual study content (user stories). The first prototype was tested by observing the users while they were testing the video tutorial and collecting feedback (empirical interviews). The first tutorial prototype was tested with the users and the task was to stream online using the tutorial instructions. The time to complete the task was measured and limited to thirty minutes (quantitative measurements) and feedback for the improvements was collected (qualitative measurements).

The first outcome of this project was the creation of YouTube brand account “MediaElementsVirtual” for the Media Elements course. Additionally, the channel structure was built to adapt in the structure of the future learning platform. Image content was taken by the development team itself for video tutorial creation, creating a manual tutorial for creating virtual content with the chosen tools and method and testing the usability of the video prototype collecting user feedback.

Based on the test results and feedback on the video tutorial prototype, the results obtained were encouraging. They confirmed that the methods and tools used in the tutorials were functional and user-friendly in order to get high-quality results. The outcomes can also be used in following iterations for improvements and further virtual content creation.