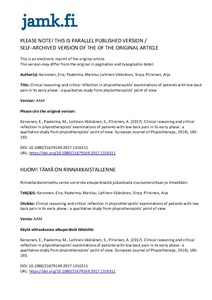 
Karvonen, Eira
Paatelma, Markku
Laitinen-Väänänen, Sirpa
Piirainen, Arja
Taylor & Francis
All rights reserved. This publication is copyrighted. You may download, display and print it for Your own personal use. Commercial use is prohibited.
doi:10.1080/21679169.2017.1316311
Näytä kaikki kuvailutiedot
Julkaisun pysyvä osoite on
https://urn.fi/URN:NBN:fi:amk-201904024190

Aim: The aim of this study was to deepen the current understanding of physiotherapists’ decision-making process and more specifically, to investigate their reflections on their clinical reasoning when examining low back pain patients.
Method: Data were collected in interviews with six physiotherapists, were the stimulated recall method was used. Interviews were audio-recorded and transcribed and then analysed by content analysis.
Results: Physiotherapists critically analysed and reflected their choices and decisions in clinical reasoning with patient’s symptoms, onset of pain, clinical test choices and results. They stopped to consider the adequacy of tests for drawing conclusions and their own manual skills as physiotherapists and also the classification of LBP being used. At critical reflection levels, based on King and Kitchener, physiotherapists’ judgements were at levels four to seven.
Conclusions: The results showed that physiotherapists critically justified their clinical reasoning by systemically using a hypothetico-deductive reasoning model and reflected on their decisions in all phases of low back pain patient’s examination, from the history to the physiotherapy diagnosis and also on the classification of non-specific low back pain.