The United Kingdom’s departure from the European Union: How leaving the single market and customs union would affect Scotch Whisky exports to Finland 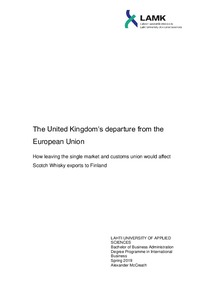 Since the United Kingdom voted to leave the European Union in the 2016 Brexit referendum, there is an increasing likelihood that there will not be a trade deal between the two parties. Scotch Whisky is a net contributor to the UK economy and is one of Scotland’s most important exports. The thesis aims to find out the kind of barriers could arise if the UK leaves the EU without a trade deal. It also aims to ascertain how those trade barriers would affect Scotch Whisky exports to Finland as an EU member state and how Finnish customers would react to those effects.

The thesis uses deductive methods, in addition to qualitative and quantitative research. Primary and secondary data is used in the thesis. The secondary sources are as follows: books, electronic articles and other online materials, which are referenced in the theoretical part of the thesis, Scotch Whisky export statistics, and facts concerning the EU Single Market and Customs Union. The primary data is collected from a dialogue with the product manager of a company that imports Scotch Whisky and supplies Alko (the national alcoholic beverage retailing company in Finland), and, a questionnaire, which was then analysed.