Factors leading to faster progression of HIV to AIDS 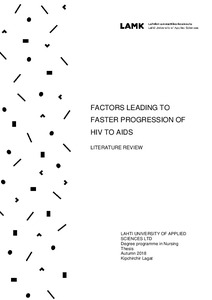 Lagat, Gideon
All rights reserved. This publication is copyrighted. You may download, display and print it for Your own personal use. Commercial use is prohibited.
Näytä kaikki kuvailutiedot
Julkaisun pysyvä osoite on
https://urn.fi/URN:NBN:fi:amk-201904185553

The extreme differences experienced in the rate of HIV to AIDS progression have received remarkable interest from medical researchers. Nevertheless, despite the increased attention the phenomenon has received, recent reports highlight that the factors influencing the progression are not fully understood. Researchers have however attributed the progression of HIV to AID to various factors that include viral genetic factors, host immune responses and environmental co-factors. Some of the viral factors that have been evidenced to influence progression include viral subtype, co-receptor use and presence of deleterious mutations in the virus. Host factors include elements such as age, ethnicity, gender, psychosocial, CYP polymorphism, HLA and body mass index. Environmental factors include socio-economic status and mode of transmission. The purpose of this review was to highlight the progress and changes that have taken place over the past few years in relation to the use of newly identified biomarkers that predict HIV disease progression. A literature review was undertaken to synthesis findings from a wide array of scholarly researches published between 2010-2018 to develop definitive findings and gain new understanding on the subject matter. The study particularly focuses on the progress that has been achieved in explaining some of the factors that might contribute to faster HIV disease progression in resource restrained regions. Current evidence suggests that differences in demographic, education, social, cultural and economic factors between developed and developing countries may contribute to variability in the rate of HIV disease progression. Therefore, in order for nurse’s practitioners to design effective intervention and prevention programs, it is vital to consider social and cultural variations.