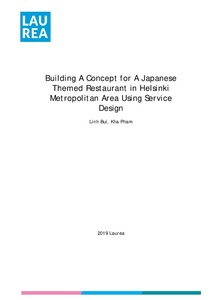 The purpose of this thesis is to create a concept for a new Japanese-themed restaurant, X Ravintola, to implement healthy and vegan food trends targeted at Finnish customers living in the Helsinki Metropolitan Area. In addition, its service design aims to introduce Japanese cuisine and the conscious eating as a concept to Finnish people. X Ravintola will be developed based on market research and various service design methods to generate exclusive ideas for its service and interior design. With Japanese cuisine and healthy lifestyle as the restaurant’s primary development direction, the thesis focuses on three background topics: Japanese food culture and eating habits, the intersection between Japan and Finland, and the determinants of human’s food choice. To support the theory framework, the authors will use several sources including published literatures and various online articles.

The research methods used for the development tasks are online interview and benchmarking by observation. To obtain an overview of the restaurant’s development process, a online interview was conducted with residents in the Helsinki Metropolitan Area. Target interview respondents are students, restaurant managers and office workers such as IT engineers, lawyers and investment bankers. The interview questionnaire focuses on people’s food choice and monthly food budget. It was answered by sixty-nine people. The second method, benchmarking by observation, was used to obtain information about a different restaurant which operates with a similar concept idea and customer segment. The observation process lasted two months and was conducted during lunch time and late lunch. The data collected from the observation includes restaurant location, pricing, customers’ lunch preferences, restaurant activities such as eat-in, takeaway and delivery services.

The outcome of this thesis is a complete design concept for a Japanese restaurant in the Helsinki Metropolitan Area, developed with the understanding of customers’ food choices and the Finnish market. The restaurant concept is built using service design methodology, particularly Ojasalo’s four-step Innovation Service Design Process that incorporates the steps of Map and Understand, Forecast and Ideate, Concept model and Evaluate. Last but not least, the restaurant menu takes inspiration from and strives to promote Japanese cuisine and their healthy eating trend.