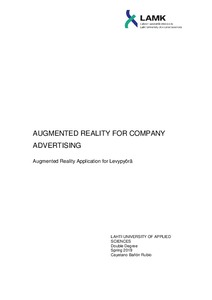 Bañon Rubio, Cayetano
All rights reserved. This publication is copyrighted. You may download, display and print it for Your own personal use. Commercial use is prohibited.
Näytä kaikki kuvailutiedot
Julkaisun pysyvä osoite on
http://urn.fi/URN:NBN:fi:amk-2019052812503

The company Levypyörä wanted to make an application in AR for mobile devices, in order to differentiate itself from the competition and show its strengths. To prepare to the case, the tools for developing AR were examined, and the SDKs available in the market with support for 2D recognition were studied. After this, the development process was started. First, a study of the brand was made, and then the environment for developing (Unity) and the SDK for developing the AR (Vuforia) are chosen. Later, the interactions were added to the application. The final result of the application is satisfactory for the company. The project is for private use of the company, although, the initial purpose was to release the application for platforms such Google Play and Apple Store