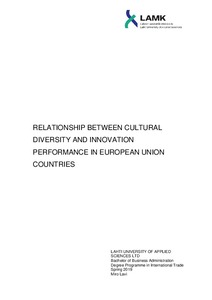 Lavi, Miro
All rights reserved. This publication is copyrighted. You may download, display and print it for Your own personal use. Commercial use is prohibited.
Näytä kaikki kuvailutiedot
Julkaisun pysyvä osoite on
https://urn.fi/URN:NBN:fi:amk-2019052913244

This study is divided into two sections: theoretical and empirical. The theoretical part of the study consists of two parts, in which the terms innovation and cultural diversity are introduced and discussed. The empirical part demonstrates the results, which are divided into the descriptive statistics and the correlation analyses.

The data used in the study were comprehensively collected from secondary sources: the databases of Eurostat and Statistics Finland. The study was conducted using quantitative methods and the analyses were performed by IBM SPSS version 25.

The results of the study identified a moderate positive correlation between greater cultural diversity and better innovation performance. In addition, change in cultural diversity and change in the “in-house” innovations of the small and medium-sized enterprises indicated a very weak positive correlation between 2010 and 2016. The results were statistically significant. Concerning the foreigners’ occupational groups and innovation performance, the results identified a strong positive correlation among the relative change of foreign managers and increase in intellectual properties. However, the P-value was too high, which made this result statistically insignificant.