Breaking Down Brexit : What it could mean for the British Economy and International Trade 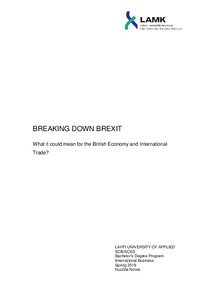 Nuuttila, Noora
All rights reserved. This publication is copyrighted. You may download, display and print it for Your own personal use. Commercial use is prohibited.
Näytä kaikki kuvailutiedot
Julkaisun pysyvä osoite on
https://urn.fi/URN:NBN:fi:amk-2019052913339

United Kingdom’s exit, or more familiarly known Brexit was a political decision of decision makers and the referendum voters to leave the European Union. This was done due to multiple different factors which intended to make United Kingdom more sovereign.
Most of the people have very extreme-end opinions on the topic whether they want to remain or leave. In the thesis the period considered is 2016, the beginning of Brexit until 29 March 2019, the originally planned exit date.
The main purpose of the thesis is to unfold and evaluate the economic benefits and disbenefits of the exit of United Kingdom from the EU as well as to see how this happened. This is done by deep research on the topic and comparing the announced different scenarios of Brexit. This is done also to gain a better understanding what are the options for the country in this process and what are the differences of the options.
Macroeconomics is a collection of economic theories which affect a large, whole economy and therefore, is also used as the foundation of this thesis in addition to international trade theories such as the Gravity Model. A huge role plays the opinions of economists which are compared and evaluated. The research is done by using both, quantitative and qualitative methodology as the data researched is varying from numeral to non-numeral.