Belonging everywhere and nowhere: The struggle of Third Culture Kids and their need for support in early childhood education and care 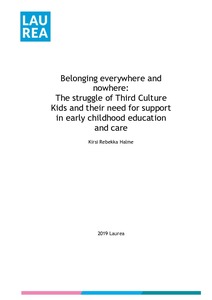 Halme, Kirsi Rebekka
All rights reserved. This publication is copyrighted. You may download, display and print it for Your own personal use. Commercial use is prohibited.
Näytä kaikki kuvailutiedot
Julkaisun pysyvä osoite on
http://urn.fi/URN:NBN:fi:amk-2019053113731

Have you ever met a person who was born in Germany to an Indian father and Swiss mother, who grew up in New Zealand and now lives in Guatemala? These Third Culture Kids, or TCKs for short, are a growing demographic group in this globalised world yet, paradoxally, are not well known nor studied.

The Finnish National Core Curriculum for Early Childhood Education and Care states that children’s various cultural and linguistic backgrounds are perceived to enrich the community and the development of cultural identities and self-esteem is supported in early childhood education and care.

The material for this thesis was gathered through an online survey in April 2019. 31 Third Culture Kids answered the questionnaire. Results indicate that 73% of the TCKs did not receive any support when they were under 7 years old, the age when one is in early childhood education, but 48% would have needed it. In addition, even though 52% feel they would not have needed support when they were under 7 years old, but rather later in life when they were older, 68% of the TCKs recognised receiving early support would have helped them later on in life. 100% find it important to support Third Culture Kids in early childhood education and care.

Analysis of the results hints of the struggles the TCKs have struggled with within their lives due to their highly mobile background. When young many worried about blending in; their appearance, language and “being normal” or fitting in. As the TCK’s grew older their hardships focused more on the sense of belonging, finding “home” and building long-lasting relationships; finding or, rather, building their roots.

To conclude, support should be provided in early childhood education and care for Third Culture Kids, it is indeed important.

Recommendations for the future from TCKs themselves include addressing the issue and open discussion. This would make them feel acknowledged, accepted and less alone and speaking about their global background would ease their later lives.