CASE STUDY: SMAVA GMBH - The search engine results ranking of an advertisement in relation to its effectiveness 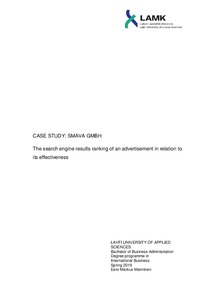 Manninen, Eero
All rights reserved. This publication is copyrighted. You may download, display and print it for Your own personal use. Commercial use is prohibited.
Näytä kaikki kuvailutiedot
Julkaisun pysyvä osoite on
https://urn.fi/URN:NBN:fi:amk-2019053113822

The purpose of this study was to understand if the case company should aim to have its advertisements in high positions on the search engine results page to improve the effectiveness of its advertisements.
Research question: Is there a measurable connection between a search engine advertisement's position on the results page, and its effectiveness?
The study was done as a quantitative case study, as the author saw it as the most applicable method to evaluate a measurable relationship between the two factors mentioned above. By comparing the findings of the previous studies on the subject, against the observations made during the case analysis, the author investigated whether the theories presented in the prior researches held right in the author’s case.
The findings suggest that clickthrough rates decrease with the position, which confirms the theory that most of the search engine users prefer clicking on the advertisements located at the top of the results page. However, contrary to the common notion, when comparing the position and the conversion rates, a more significant percentage of the people that clicked on the advertisement at the lower positions ended up converting. In the case company’s case, conversion refers to a completed online loan application. Furthermore, the conversions and the costs of the case company’s’ advertisements were heavily biased towards the highest positions of the search engine results page. Therefore, it would be challenging to get a similar volume of conversions in the lower positions. However, in order to avoid paying for clicks that won’t result to value gained for the company, the case company should focus less on the clickthrough rates. Instead, the study results suggest that the case company should consider conversion rates and cost per conversion rates when determining the optimal ranking for a given advertisement.