Calculation of Kerto-S floor beams according to Russian norms. 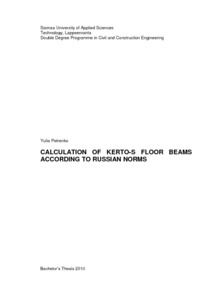 The company named Finnforest is interested in selling their products on the Russian market.
This is possible due to following reasons:
• The European part of Russia borders to Finland, so the delivery of products doesn’t take much time.
• Finland imports approximately 7,5% of Russian raw wooden material, so Finnish companies are known on the Russian market.
• LVL is not widely spread in Russia, so there are no as much competition as in other European countries and USA.
It is problematic that Finnforest calculates their manufacture in compliance with the Eurocode, which is not acceptable in Russia where another regulation is valid. So, as a result of calculation in accordance with Russian SNIPs, two diagrams should be made where maximum span lengths and maximum characteristic loads were represented. Kerto-S was selected as a beam because of its strength, dimensional precision and stability. It is a perfect choice whenever the requirements include minimal deflection. It is also more suitable and economical for floor beams because of variety of lengths and cross sections.

To achieve the final goal (complete diagrams) Mathcad software has been used, and the beams have been calculated according to Russian norms. This program was accepted to meet the company’s wishes. During calculations formulas and values from following norms were taken: SNIP # II-25-80 “Timber structures”, SNIP #2.01.07-85 “Loads and influences”, “Handbook for designing timber structures”,standard of organization SТО 36554501-002-2006 “Wooden glued and solid timber structures”. To draw diagrams Microsoft Excel program was used as a more comfortable variant. The Finnwood 2.3 program, which calculates in conformity with EN 1995-1-1:2004+A1:2008 and National Annex has also been used just for familiarization.

Certainly there are some differences in ideology of calculations according to SNIP and Eurocode (values of loads, factors etc). Therefore, the values of the final diagram differ from those of Finnforest.