An activity pack to support the second language acquisition of English for a bilingual preschool group in the Y.E.S. daycare centre 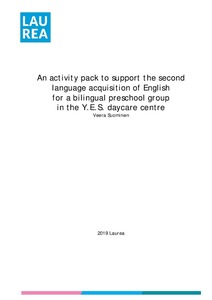 Suominen, Veera
All rights reserved. This publication is copyrighted. You may download, display and print it for Your own personal use. Commercial use is prohibited.
Näytä kaikki kuvailutiedot
Julkaisun pysyvä osoite on
http://urn.fi/URN:NBN:fi:amk-2019060514986

The purpose of this activity-based thesis was to create an activity pack to support the second language acquisition of English for children in a bilingual preschool group. The thesis was made in collaboration with the Y.E.S. day care centre operational in Vantaa. The activity pack was created for one of their bilingual preschool groups. The aim was to give the workers in the kindergarten a new way to support the language acquisition of children and give children a fun way to learn the language. A product was created that contains a pack of cards, a board, pieces for the board, travel passports for the children and an instruction sheet. The theoretical framework of this thesis explains early childhood education in Finland, the language immersion method, child development and learning as a child with an emphasis on language development and learning a new language. The theoretical framework of the thesis also explains the benefits of play and games for children and the connection they have to learning.

Two sessions were planned to be held with the children to test the activity pack out, but only one of these sessions happened. The goal was to see how the activity pack works and what should be developed. The emphasis was on game development rather than on the experiences of individual children. The activity pack was left with the kindergarten for them to keep using it and seeing how it works. Feedback was collected from the teachers afterwards via email. The session held went well, and children seemed to be excited and motivated to keep using the activity pack. It would have been good to have more sessions with the children, but the way the sessions were arranged didn’t benefit the children’s language acquisition as well as using the product the way it is meant to be used. Together with the teachers, we concluded it would be better for them to keep using it and seeing how it works.

For the most part, children seemed to enjoy the activity, and a benefit to the activity pack in terms of language acquisition could be seen. Additionally, the activity pack supports multiple other skillsets as well. The aims and goals set in the beginning of the thesis process were reached and fulfilled. The product could be further developed to different age groups and different language-based language immersion daycares. Additionally, more could be studied regarding the theoretical framework. For example, executing a study on how playing affects children’s learning could be a considerable thesis idea.