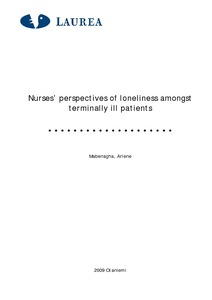 The beginning of every serious illness is a halt, normal life seems to be replaced by another kind of life. Death which is inevitable, is not only distressing and overwhelming, but is often accompanied by the feeling of loneliness both for the dying and their care givers. The focus however, is not just the level of loneliness as a feeling, but rather how people cope with loneliness which may be an integral part of dying.

The purpose of this study was to describe from nurses’ perspectives, the nursing care given to terminally ill patients so as to support and enable them to come into terms with their situation with strength, courage and dignity. This study was based on a literature review which described the characteristics of terminal illness in a context wherein loneliness was experienced, and the content of nursing care which acts as a support mechanism at the final phase of life. This study was carried out in the framework of the Loneliness project which was launched at Laurea University of Applied Sciences, with the aim of making findings on how people in the Espoo region, cope with loneliness from different perspectives.

Using the qualitative content analysis, the work was divided into 4 subsections which were believed to be very essential to the nursing care of terminally ill patients. They were; physical comfort, psychological wellbeing, social functioning and spiritual wellbeing.

The findings from this study proved that, nurses witness firsthand, the plight of patients throughout the dying process and are able to recognise their complex needs more than anyone else. Nurses thus use their skills, resources and ethical judgement to support their dying patients.