Nurses' perceptions and support of elderly loneliness in nursing homes 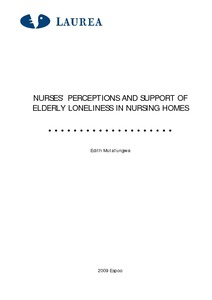 Nurses’ perceptions and support of elderly loneliness in nursing homes

Elderly loneliness as discussed in the thesis is the situation whereby an individual of above 60 years old is without companionship, thus could eventually experiencing loneliness. The purpose of the study was to find out how nurses perceived elderly loneliness and the methods they used to support lonely elderly people in nursing homes. A qualitative research method was used in the study. The thesis topic originated from the project “Experiences of Loneliness”, which was innovated by Espoo City. The writer was granted permission before conducting the study by Espoo city through a signed letter. The data was collected from Taavinkoti (nursing home) based in Espoo from November to December 2008. Consent and information letters were sent to nurses prior to their participation in the study.

The total number of participants was five who answered open questions in a written form. Nurses answered the open questions in either English or Finnish. The Finnish data was first translated into English before being analysed. A Finnish to English dictionary and an online language source (mentioned in references) were used in translating some words into English. The method of data analysis was qualitative content analysis.

The findings were categorized as family members, resident’s behavior/condition and responsibility. The nurses described elderly resident’s behavior/condition such as physical disability, reduced morality, and altered roles, increased dependency, lack of belonging and demand of attention. In addition, nurses described that the absence of family members in an elder’s life plays a significant role in an individual’s
loneliness. The study showed the supporting methods offered by nurses were nursing assistance, psychological support, physical support and social participation. The elderly represent the majority of victims being affected by loneliness in various societies. The elderly experiencing loneliness need immediate and adequate support. Extreme loneliness could lead to fatal actions such as commitment of suicide by the affected individual. It is very important that nurses working in nursing home prepare proper nursing care plans that are resident-centered.