Participatory Ethnography for assessing Child Friendly School experiences in a village in India within the FINFIgATE project, 2017. 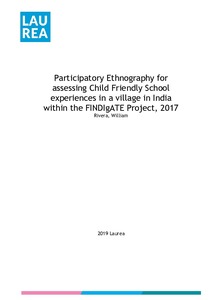 This study assesses Child Friendly School (CFS) experiences of Indian children of aged 11-16 years. The study took place within the framework of the FINDIgATE project, the main target of which was to study the wellbeing of children in India and Finland and to exchange good practices to improve children’s lives. During the last decades after the tokenistic outcome produced by developmental psychology, there has been a growing body of academic literature promoting the advantages of adopting a participatory approach on research based on the child. This study reflects on the concept of participation, the ethical considerations of children’s participation in research and the importance to keep a methodological openness or flexibility in research designs involving young people.

The goal of the project was to develop participative methods in research with children. Three pilots were carried out to access the narratives of Child Friendly School experiences of students aged 11-16 years through a specific participatory methodology. The methods, based on children’s voices, reflected on a future program for implementing the Child Friendly School (CFS) UNICEF model in the community. The objectives of the study were to determine which of the three participative methodologies effectively facilitated children’s voice about their CFS experiences. Based on children’s point of view, the goal was to review the gap between the ideal features of the CFS principles and the reality of available resources in the context of the research and to draw recommendations about implementing the complete set of CFS standards in the future.

The author adopted an ethnographic approach and implemented a semi-structured interview aided by three participative methods (mapping the school, photo-ethnography and Lego Play). The results were analysed through the Program Theory-driven Evaluation and the guidelines of feminist ethical research. The participants (25 children in total) reported being victims of physical or verbal punishment. From the total of children, 19 said that they only spoke about the physical punishments with their friends. Several of them gave evidence of a lack of safety in the infrastructure of the school. The girls said that they wait until the recess to visit the toilet at their home. From the total of children, 23 said that the person(s) they trust the most at the school were their friends or a friend and few of them mentioned trusting some of the teachers. Of the children, 21 said that the playing ground or playing with their peers was the aspect they liked the most from their school. In addition, they mentioned that they enjoy spending time in the computer room.

The most effective participative method within this cultural context was the Lego Play, which allowed children to be more spontaneous, produced more diverse narratives and aided them to display a very cooperative behaviour with their peers.