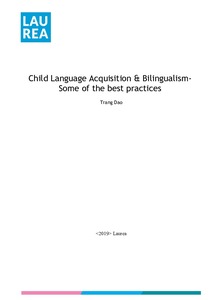 Dao, Thuy Trang
All rights reserved. This publication is copyrighted. You may download, display and print it for Your own personal use. Commercial use is prohibited.
Näytä kaikki kuvailutiedot
Julkaisun pysyvä osoite on
https://urn.fi/URN:NBN:fi:amk-2019070817646

This literature review was born out of my belief in limitless possibility that a prominent early language education could bring to a child’s future. It guides parents and caregivers through the basic understanding of child language acquisition and bilingual education. This present paper is not only dedicated to children of mixed backgrounds but also to any children whose parents are open to bring up their children speaking languages other than their own parental language. Since it is quite a large topic with a lot of complexity, the age target of this thesis is exclusively limited to children from 0-6 years old.
Literature review using thematic analysis is the main method of composing this thesis. Theoretical foundation of the thesis comes from dominant studies and researches in the domain of Child Language Acquisition and Early Bilingual Education. From the body of literatures, several findings were taken into consideration:

There are remaining mysteries in the study of languages-mind and the process of child’s language acquisition, no theory approach is absolute. It is essential to consider each child as individual in his/ her own context to support his/her journey of languages learning.

If we embrace all the theory approaches and form a synthesis of them, it is worth noting that, every human child is naturally capable of learning any human language. The mechanism that babies learn languages is extraordinary during their childhood compared with adulthood. The language acquisition process is the same for babies raised monolingual and those raised bilingual. The only difference lies in the fact that bilingual toddlers receive two language inputs at once and see those languages as two first languages instead of having only one first language like monolingual toddlers. Despite child’s innate ability of acquiring languages, the process of child language acquisition, especially in the case of bilingual raised kids, could not be fulfilled without favourable environment, interactions (notably with those who can act as language guide of the child) and suitable educational methods.

Training children to be bilingual is done through controlling the language inputs. There are two methods of raising children bilingual: either One-Parent-One-Language (OPOL) or drawing language boundaries through situations. There are also some cautions that need parents to pay attention during the critical period of language acquisition.

In further analysis and discussion of the topic, I refer to the actuality of the topic, suggestion about future studies, supporting language education and developing early bilingualism.