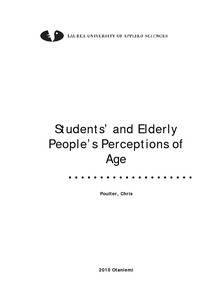 Finnish population is ageing fast. The same development can be seen in other European countries. Age sets certain constraints and expectations of what is seen as appropriate. The ability to understand the prevailing culture of how to perceive old age is elemental in order to analyze the factors which could possibly hinder social work with the elderly and young people on an individual or organizational level.

On the top of the theoretical knowledge of ageing in the social field there is a need for a better understanding of how the elderly persons and young people alike perceive old age. The aim of this study was to give an arena for old and young people to express their own thoughts on the subject that is currently discussed in media.

A rich combination of the different theoretical aspects is reflected in the light of the empirical data. The data was collected among clients in an Elderly care unit and the degree students at The University of Applied Sciences (Laurea Otaniemi) during the months of September and October 2010. A total of four elderly willingly participated in the story telling based interview and a total of five students took part in the study by writing their personal narratives on the topic. Qualitative content analysis was used as a research method in the data analysis.

Four main categories and fourteen subcategories were formed as a result of the data analysis. The main categories consist of physiological and psychological condition, personal state of mind, culturally bounded content and societal approach. The findings uncovered some differences in the concepts of age between different age groups. However, what was more significant was the general alikeness in the stories of the informants. The findings of the study can be used by a number of different organisations to effectively see the needs of the elderly persons. The study reveals that both the young and the old are affected strongly by age discrimination in our society.