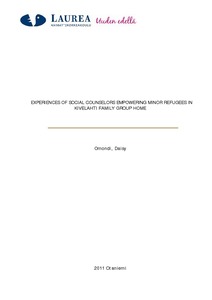 The topic for the thesis was chosen through an interest in promoting an ideal living environment for minor refugees. The study is based on social counsellor’s experiences describing what an ideal working environment would be for minor refugees living in Kivenlahti family group home. The themes in the interviews were safety and security, social skills, developing networks and professional development. Qualitative Research Method was used, using themed interviews. Six social counsellors working at Kivenlahti Family Group Home took part in the individual interviews which were done in English and Finnish language.

Qualitative content analysis was used to analyse the data and theory content was considered during the analysis.

The conclusions drawn from the findings, shows that most workers in Kivenlahti have had working experiences in social work areas, and observed that the minors have the need for safety and security, of which the home provides but the minors security in the public is not guaranteed. Despite the fact that most of the informants described their job as routine, and one that has no specific formula, they considered training as an important means of improving their professional skills. One possible way to keep the minors safe is by educating the public on issues that regard minors and immigrants and also integrating the minors through schools so that they will feel part of the society and gain their own independence.