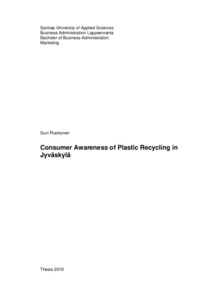 Ruokonen, Suvi
All rights reserved. This publication is copyrighted. You may download, display and print it for Your own personal use. Commercial use is prohibited.
Näytä kaikki kuvailutiedot
Julkaisun pysyvä osoite on
https://urn.fi/URN:NBN:fi:amk-2019120525108

The objective of this study was to examine the consumer awareness of plastic recycling among the citizens in Jyväskylä. The survey was conducted based on the theory part, where the origin and history of plastics were described.

The research was reported in two sections. First, previous literature and material was revieved, including sources such as books, previous studies and researches, news, articles and magazines. The second part was the phase when the empirical data was collected. That was conducted by a study based on interviews. The study was focused on 12 tenants of a chosen housing cooperative.