Male Perspective to Gender in Conflict Prevention and Peacebuilding Settings 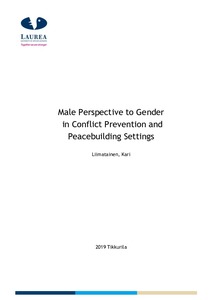 Liimatainen, Kari
All rights reserved. This publication is copyrighted. You may download, display and print it for Your own personal use. Commercial use is prohibited.
Näytä kaikki kuvailutiedot
Julkaisun pysyvä osoite on
http://urn.fi/URN:NBN:fi:amk-202001231549

Promoting gender equality is recognised as an effective way to prevent conflicts and building sustainable peace. Gender mainstreaming has been the leading trend for more than 20 years when it comes to gender and peacebuilding. Recently, some focus has shifted into men’s role in fighting gender inequality. This master’s thesis aims to unravel the gender related factors in Conflict Prevention and Peacebuilding (CPPB) by reviewing the phenomenon of masculinity and its dimensions in CPPB settings.

This master’s thesis is a qualitative study and the data for the research was collected by interviewing three experts on gender in CPPB settings. The data collection method was chosen based on an assumption that it will provide the best oversight of the phenomenon and enable a diverse and versatile range of perspectives about the topic. Inductive content analysis was used as a method for analysing the collected data to avoid prejudices and biases.

The results of this study suggest that conflict prevention and peacebuilding processes should be designed comprehensively and include the whole population without distinction based on gender or any other factor. The traditional binary perspective on gender divides people into groups (men and women) and does not take individuality into consideration enough. Focusing on individual traits and needs would be a more inclusive approach. The concept of gender as well as the concept of peace are dependent of the context. Thus, locally constructed ideas are the key for creating successful solutions in building sustainable peace.

Culture has a strong influence on gender roles and expectations to one’s gender. Many people are struggling to meet the cultural norms and constructing their identity within the surrounding expectations. This may lead to negative behaviour and cause mental issues such as depression and anxiety. In many cultures, mental issues as well as challenging existing gender norms are taboos and thus very difficult to deal with.

The recognised possibilities for positive change were raising awareness, strengthening the situationally changing norms and using positive narratives beyond gender. During conflicts, gender roles usually change quite a bit as men are actively participating as combatants and women must fill in and take care of other responsibilities. In post-conflict situation there is often a push-back to pre-conflict gender roles but preventing the push-back could lead to a sustainable change. Instead of gender roles, thinking of what a sibling, a friend or a parent would do in a certain scenario could be more beneficial than the traditional man-woman distinction.

A common aspect is that men are often seen as the perpetrators or as the witnesses of violence. Yet, it is also recognised that men can be the victims of violence as well. Less emphasis has been put on to why men do what they do, as well as how these things affect them. Perpetrating and witnessing violence can have many kinds of effects on one’s wellbeing and behaviour. Furthermore, victims of violent crimes sometimes become the perpetrator of a similar crime themselves. Therefore, having a deeper understanding of these kinds of patterns and the reasons behind the negative behaviour could have a positive impact in supporting gender equality and in building lasting peace.