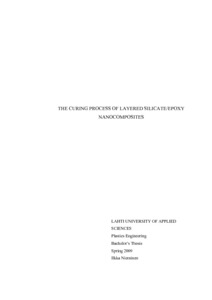 The industrial methods of processing polymeric thermoset matrix nanocomposites require a good knowledge of the matrix curing process. The dispersion of nanoparticles in the matrix effects the curing process due to the interaction between nanoparticles and the matrix at the atomic level, especially when the nanoparticles have been treated with a surfactant agent ( alquilammonium) that is in competition with the reactive groups of the hardener.