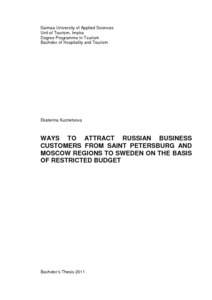 Russian tourists have become one of the major targeting segments in Sweden. They generate an enormous amount of profit to Swedish businesses. Due to that fact the interest of Swedish SME’s in Russian leisure and business tourists has grown.
The study is oriented on the business travellers from Russia and contemplates the variety of marketing options on the restricted budget for the Swedish partner NW Production.
Firstly, the Russian outbound travel patterns to Sweden were examined on the basis of secondary data. The findings reveal the tendency of the increasing outbound travel of Russians, however, the number appeared lower in the times of the economic recession.
The investigated areas in marketing to Russian business customers include print and internet advertising, participation in the tourism trade fairs and the possibilities of partnership. The research uncovers the difficulties of marketing in Russia, the reliability of Russian media channels and the advertising trends.
It was found that advertising in Russian media is more reliable than other marketing channels; however, the information from the official web pages was trusted the most. The internet penetration creates a trend of advertising online with the precise geographical segmentation. In addition, the difficulties in establishing partnerships were defined, nevertheless, participation in trade fairs tended to be efficient in establishing partnerships.