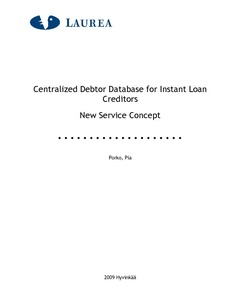 This thesis was conducted to evaluate and clarify a service idea regarding a centralized data-base collecting credit information about instant loan applicants to be shared with instant loan creditors as a means to decrease credit losses. The initial idea was formulated by Tentacle Networks Oy and generated into a ready-to-launch service concept along the process of this thesis.

The number of instant loans granted yearly has only accelerated since 2005 when the first service provider penetrated Finnish markets. Along with increasing number of loans granted has the misuse of loose foundations in granting instant loans increased as well. No centralized database has been used to record solvency of the applicants in terms of open and overdue loans from other instant loan providers and relative to this problem, instant loan providers have mainly had to rely on data collected internally.

The idea Tentacle Networks Oy introduces provides a centralized database for instant loan providers with features to verify the solvency of the applicant. Untrustworthy applicants are recognized by the system according to solvency by crosschecking for number of open and overdue instant loans from different creditors. The database uses social security number as an indicator to trace abuse of personal data and cell phone numbers.

The database development work has been in progress constantly during the writing of this thesis and will be launched as soon as the test-run in an internal environment is completed successfully. This thesis demonstrates an accurate service concept description in order to as-sist in selling the idea to the prospects and in launching the actual service.