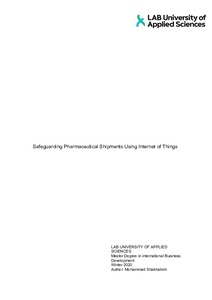 Shakhatreh, Mohammad
All rights reserved. This publication is copyrighted. You may download, display and print it for Your own personal use. Commercial use is prohibited.
Näytä kaikki kuvailutiedot
Julkaisun pysyvä osoite on
http://urn.fi/URN:NBN:fi:amk-202002162452

The pharmaceutical industry loses up to $35 billion to damaged medicines due to temperature excursions. Most of these excursions are attributed to the pharmaceutical airfreight supply chain, thus leading to an increased preference for sea and rail transport. This study sought to establish the root causes of temperature excursions of pharmaceutical airfreight and to design software and hardware-based solution to enhance collaboration and visibility from end-to-end of the supply chain. The researcher used an integrated theoretical approach dubbed confirm, explore, empathize and build, and co-create and validate. Using a pragmatic approach and case study design, qualitative and quantitative data were collected and analyzed using multiple tools and techniques. In the confirm phase, the findings show that no temperature excursions occurred during ground transport, and though there were high-temperature excursions during the summer season, there were high-and low-temperature excursions during other seasons, all the excursions occurring at the origin, transit, or destination airports. This was further confirmed through a meeting of pharmaceutical companies. In the explore phase, the problem was established to be attributed to an uncoordinated drop-off of cargo by shippers. A further examination of the problem and stakeholder concerns during the empathize and build phase led to the conclusion that the problem is caused by the fragmentation and lack of coordination and visibility in the supply chain process, and that it can be effectively solved through a software-based alarm system using a serialized online data logger. The solution was further improved and validated during the co-creation and validation phase. Further, it was found to be commercially viable through a winning prototype, and funding of US$110,000.