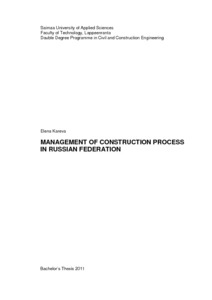 The purpose of the research is to study the stages of the investment construction process in the Russian Federation, to determine the main participators and their responsibilities and to collect all documentation for the realization of the project. The task of the work is to make some general scheme for the whole process of the investment construction activity including collection of the all documentation needed for it and the determination of authorities which issue this documentation.

Normative documents, decrees of the government, the experience of the company Ahma Engineers in Russian projects, consultations with the state authorities and the information from Internet websites were used during the work. The company already has some projects in the Russian Federation, therefore it was very useful to study their documentation. It was very important to study the current Russian legislation, because it is constantly changing and improving. The main problems were the lack of the official information about undergoing all necessary procedures and of the precise legislation base describing the whole investment construction process. Therefore the unofficial information of management companies on the Internet websites helped to understand the content of the process.

This work contains some schemes for undergoing of procedures, some tables with the determination of main stage and distribution of responsibilities. In the text the main steps of the project are explained in general case, because their content can be different, depending mainly on the location of construction. As a result, the conclusions about the problematic questions and improvements in current situation were made.