Comparison of Scaffolding Systems in Finland and in Russia 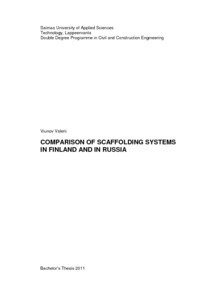 The purpose of this work was to study the present situation with scaffolding in Finland and in Russia in order to reveal differences between the systems themselves, to compare the regulations applied to scaffolding in both countries, and of course, to consider the competitiveness of European systems in Russia.

The best Russian scaffolding products were chosen and compared with German scaffolding, which is in common use in Finland.

Some information provided in this study is unique since the huge part of images and materials was obtained during the direct conversation with manufacturer’s representatives.

Russian legislation system, being constantly subjected to changes, is not novice-friendly. It took plenty of time to distinguish, which of the documents are in their power and have to be followed. During the process of studying them it was important to check all the time that they do not contradict each other.

Necessary documents that must be prepared and taken care of during the process of scaffolding assemblage and use were defined, being sometimes a confusing task for even the professionals in the field.

Comparison clearly showed that Russian scaffolding systems have not reached the European level yet and this mostly comes from the demand. Building companies are usually interested in the cheapest offers possible.

Although the prices of foreign scaffolding systems are much higher, the advantages of higher-quality products are slowly becoming to be realized. The expansion of high-quality systems will definitely push Russian manufacturers to improve their products. And this study showed that the development is already noticeable. Some manufacturers are trying to improve their systems, bringing innovative ideas to design of their joints or to production process.

And from the work safety point of view it is definitely the step forward, because scaffolding itself ever stays to be a business of a very high risk.