Voice Games: The History of Voice Interaction in Digital Games 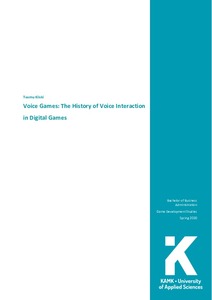 Kiiski, Teemu
All rights reserved. This publication is copyrighted. You may download, display and print it for Your own personal use. Commercial use is prohibited.
Näytä kaikki kuvailutiedot
Julkaisun pysyvä osoite on
https://urn.fi/URN:NBN:fi:amk-202004306615

This thesis was commissioned by Doppio Games, a Lisbon-based game studio that makes conversational voice games for Amazon Alexa and Google Assistant. Doppio has released games such as The Vortex (2018) and The 3% Challenge (2019).

The study was carried out through the qualitative research method by conducting online literary research. Due to limitations of resources, it was not possible to include every game that has ever featured voice interaction or cover all the various design approaches that game developers have used.