HIV testing service uptake in Finland: A study on barriers and facilitators 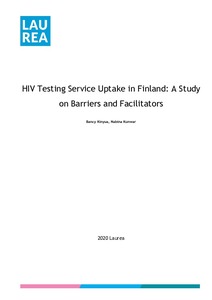 
Kinyua, Bancy
Kunwar, Nabina
All rights reserved. This publication is copyrighted. You may download, display and print it for Your own personal use. Commercial use is prohibited.
Näytä kaikki kuvailutiedot
Julkaisun pysyvä osoite on
http://urn.fi/URN:NBN:fi:amk-2020061218501

Integrative literature review was used as a method for this study. Data search was conducted in May 2020 by using four databases. Ten qualitative and quantitative studies with varying designs were included after data evaluation was done. Critical Appraisal Skills Program for qualitative studies and systematic reviews and STROBE for the cross-sectional survey were used to assess the quality of included articles. Evidences from primary articles were extracted and key barriers and facilitators to HIV testing were identified, categorized, summarized, and organized in an evidence table.

HIV testing is a crucial step for prevention and early diagnosis of HIV. Therefore, recognizing the key barriers and facilitators to HIV testing is essential to increase population testing uptake capacity. The findings can be used as a tool to facilitate creation of effective strategies, aimed at in-creasing HIV testing service uptake, and decreasing the number of infected people who are unaware of their status.