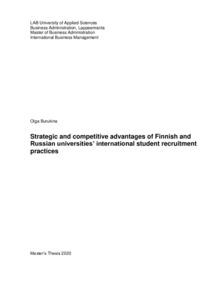 Burukuna, Olga
All rights reserved. This publication is copyrighted. You may download, display and print it for Your own personal use. Commercial use is prohibited.
Näytä kaikki kuvailutiedot
Julkaisun pysyvä osoite on
http://urn.fi/URN:NBN:fi:amk-2020081319745

The purpose of this study was to find out what particular push and pull factors attract foreign students to Finnish and Russian universities today, and what strategic and competitive advantages the given universities have achieved and can achieve and develop. The increased importance of larger populations of international students required by both national ministries of higher education and university websites and documents as data sources prompted research of Finnish and Russian universities' international student recruitment practices on a comparative basis.

The theoretical part of this study reviews migration theory and agency theory, as well as particular push and pull factors attracting foreign students to Finnish and Russian universities, including the host countries' reputations and university brand recognition, cost advantages and degree values. The information in the empirical part was gathered by studying research materials of the case study universities based on a survey engaging foreign students studying at Finnish and Russian universities and personally involved in practices of developing their preferences in choosing a university in a foreign country for studies and future plans beyond.

The results of the study have revealed some good practices in the given universities but also highlighted certain issues and problems requiring urgent attention of the university decision makers. Based on a comparative analysis of the universities' practices, the study has identified some development possibilities that should be taken into account for the universities' further strategic and tactical improvement. Based on the findings, a scope of recommendations has been formulated, aiming at improvement of international student recruitment practices in the two case companies (1 Finnish and 1 Russian universities), as improved recruitment practices do not only contribute to increased populations of international students but also improve universities competitive advantages – primarily their international brand recognition and degree value.