Prediction of life satisfaction in people with Parkinson’s disease 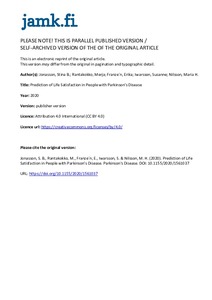 Introduction. People with Parkinson’s disease (PD) have lower life satisfaction (LS) than healthy peers. No study has yet identified predictors of LS in people with PD. Such information would be valuable for health care and future interventions that aim to maintain or increase LS. Aim. To examine how LS evolved in people with PD over a 3-year period, as well as to identify predictive factors of LS. Methods. We used data from baseline assessments and a 3-year follow-up of 163 people with PD (baseline, mean age 68 years; median PD duration 8 years, 35% women). LS was assessed with item 1 of the Life Satisfaction Questionnaire (LiSat-11). Dichotomized LS data from the 3-year follow-up were used as the dependent variable in multivariable logistic regression analyses. In the first step, independent variables included baseline information on sex, education, general self-efficacy, motor symptoms, perceived walking difficulties, fall-related activity avoidance, and difficulties with/need help in activities of daily living. At the second step, depressive symptoms were added as an independent variable. Results. The proportion of those who reported being satisfied with their lives reduced from 63.2% at baseline to 49.7% 3 years later (). When depressive symptoms were not included in the analysis, general self-efficacy (odds ratio, OR = 1.081; 95% CI = 1.019–1.147) and perceived walking difficulties (OR = 0.962; 95% CI = 0.929–0.997) were significant () predictors of LS 3 years later. With depressive symptoms included, the influence of walking difficulties diminished, and depressive symptoms (OR = 0.730; 95% CI = 0.607–0.877) and general self-efficacy (OR = 1.074; 95% CI = 1.010–1.142) were the only significant predictors of LS 3 years later. Conclusions. LS is reduced over a 3-year period. The study suggests that perceived walking difficulties, general self-efficacy, and depressive symptoms are important predictors of LS in people with PD.