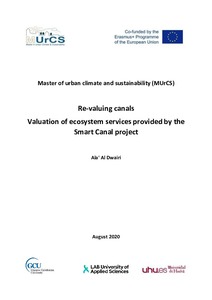 This dissertation aimed to highlight the different roles canals can play in cities by mapping the provision of Ecosystem Services (ES) provided by the Smart Canal project in the north of Glasgow city. (3.610Mt)
Lataukset:

Al Dwairi, Ala
All rights reserved. This publication is copyrighted. You may download, display and print it for Your own personal use. Commercial use is prohibited.
Näytä kaikki kuvailutiedot
Julkaisun pysyvä osoite on
http://urn.fi/URN:NBN:fi:amk-2020101421321

The primary purpose of this work was to provide a new view of the role canals can play in cities. In Glasgow city, canals were held highly for its role in shaping the industrial image of the city during the industrial revolution (1790-1930). After the Forth & Clyde canal (‘the Canal’ in further text) demise due to the uprise of railway transport, it moved to hold a scheduled monument status with recreational uses in the city. This dissertation aims to highlight the different roles canals can play in cities by mapping the provision of Ecosystem Services (ES) provided by the Smart Canal project in the north of Glasgow city. Furthermore, the performed ES mapping started by adopting a Multi-Criteria Decision Analysis (MCDA) using Geographic Information System (GIS). Eight ES (one provisioning, five regulating, and two cultural) were mapped based on available spatial data for land use and landcover classes combined with other criteria. The MCDA criteria were selected based on existing research and the study area characteristics. GIS map algebra was used to analyze the ES provision maps, identify areas providing multiple ES and highlight areas of possible synergies and trade-offs between ES.

The results showed that the Smart Canal area has considerable potential for offering regulating and cultural services in comparison with provisioning services. The highest ES provision was for enhancing water quality and carbon sequestration followed by flood control and evaporative cooling. As well, the Canal showed intermediate to a high potential for the delivery of habitat areas (biodiversity).

Moreover, the north-western part of the Canal proved to be a 'hotspot' for the delivery of multiple ES, making it a highly sensitive area in need of sustainable planning to manage ES synergies and trade-offs adequately. Thus, the results of this analysis fortified the role of the Canal as an adaptation tool to face climate change threats as well as its potential for forming an ecological corridor creating a refuge for urban wildlife.

The mapping of the Canal’s ES portrayed in this analysis can be used as a decision support tool for planning areas around the canals network in Glasgow and to ensure sustainable management of canal resources.