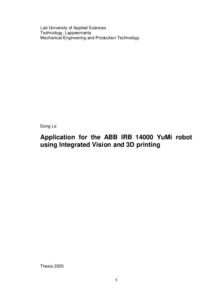 Le, Dong
All rights reserved. This publication is copyrighted. You may download, display and print it for Your own personal use. Commercial use is prohibited.
Näytä kaikki kuvailutiedot
Julkaisun pysyvä osoite on
http://urn.fi/URN:NBN:fi:amk-2020101921435

The purpose of the study was to design a demo application for ABB IRB 14000 YuMi robot. The thesis work was made for the Department of Robotics at Technical University of Ostrava, situated in Ostrava, Czech Republics. Computer-aided design was conducted by the use of PTC Creo Parametric, ABB rapid programming, image processing, and virtual simulation were conducted in ABB RobotStudio.

Based on the thought of how to make the best use of the Yumi robot, the truly collaborative robot of ABB, the idea of the demo application came up. Although several ideas were brought to the table, the demo application using dices was chosen, because the Yumi robot can use 2 arms synchronically instead of using 2 robots to carry out the task, furthermore, the application required an image processing task, thus the visual function in the left arm was necessary. In this demo application, the ABB IRB 14000 proves that it is outweighed other traditional industrial robots in some tasks that require robots mimic human action and vision task without an outsource camera system.

This thesis describes the whole demo application process from brainstorming ideas, background research, 3D concept design, calculation, program, virtual simulation to the finished tests on the YuMi robot. After completing the demo application, the end-user has the ability to run the application without set-up, pre-knowledge of robotics, and programming.

The result of the project can be helpful for further research of the collaborative robot, 3D printing technology, and image processing on ABB integrated camera for industrial robots.