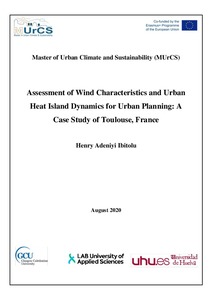 Ibitolu, Henry Adeniyi
All rights reserved. This publication is copyrighted. You may download, display and print it for Your own personal use. Commercial use is prohibited.
Näytä kaikki kuvailutiedot
Julkaisun pysyvä osoite on
http://urn.fi/URN:NBN:fi:amk-2020102021465

To build liveable, resilient and climate responsive cities today, there is a need for city planners to understand the local complexities of the urban environments, especially in a changing urban climate. The prevailing wind flow over a city determines to a great extent the urban heat island (UHI) intensity in the city, thus it is important to understand the wind pattern in a city, since natural wind ventilation is one of the most effective energy-saving strategy to improve the overall thermal comfort level at the city scale.

This study has attempted to do exactly that, by employing the Local Weather Type (LWT) classification to conduct a spatio-temporal wind analysis of the Toulouse Metropolitan region in France under the warm and dry summer months of 2004. The administrative urban database describing the surface properties and the wind simulation output from the mesoscale atmospheric model Meso-NH at 250 m x 250 m horizontal resolution across the city of Toulouse was used in this research. The simulation provided city-wide wind data at 10 m above average building height, hence representative of the prevailing wind situation over Toulouse. To quantify the wind characteristics, a mean and frequency statistical approaches were evaluated in R. Results revealed that the frequency cartographic maps tend to show more details of the distinct shape of the densely built urban centre. Also, it was revealed that the mean analysis over-estimated the wind velocity by 1-2 m/s during daytime for all local weather types. At night, both methods show similar velocity intensity from East to West, though LWT-9 tends to under-estimate the wind speed by 2 m/s around the airport for the frequency analysis.

Furthermore, using the local climate zones (LCZs) classification describing the built urban morphology in the city, attempts were made to understand how the nocturnal UHI varies between LCZs in relations to changes in wind intensity. The results show that compact buildings LCZ-1/2/3 (compact high/mid/low-rise) which are predominant in the city-centre recorded the strongest average nocturnal UHI intensity of 2.57 degree Celsius. Not surprising, this same compact LCZs had the highest decrease in the wind intensity (-0.20 m/s) from daytime to night-time. Meanwhile, the highest increase in wind intensity (0.47 m/s) is observed in LCZ-9 (Sparsely built) which corresponds to the weakest nocturnal UHI intensity of 0.32 degree Celsius. This is expected since the urban-rural thermal gradient is at the highest at night-time because of the thermal properties of the building materials. Additional analysis reveals that the intra-LCZ variabilities of UHI and wind intensity can be explained by the distance to the city centre.

Consequently, the anticyclonic urban breeze circulation on 4th July 2004 documented in previous work was represented here on a cartographic map to help urban planners better understand this phenomenon. The map revealed that for the few hours between 15:00 – 18:00UTC there was a NW-SE breeze pattern, with near-surface wind advection from the less built-up northern part of the city, towards the urban centre. This breeze can also accentuate the diffusion of pollution from the industrial campuses in the suburban into the centre especially as the extent of the breeze covers a large portion of the NW-SE mesoscale cross-section.

Finally, the characteristics of the pedestrian wind velocity ratio in relation to the building volume density was analysed. The results revealed that the higher the building volume density per unit area, the lower the velocity ratio at the pedestrian level. Ultimately, this study has proven that city-scale urban climate study can greatly assist urban planning professionals design and make data-driven decisions that will lead to more sustainable future cities.