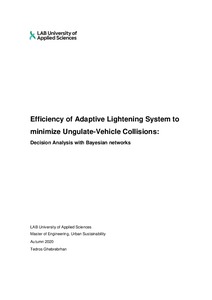 Ghebrebrhan, Tedros
All rights reserved. This publication is copyrighted. You may download, display and print it for Your own personal use. Commercial use is prohibited.
Näytä kaikki kuvailutiedot
Julkaisun pysyvä osoite on
https://urn.fi/URN:NBN:fi:amk-202101171313

In Urban development, despite its benefits to society, the extension of highways and roads can take up land, interfere with and isolate natural biotopes, form an obstacle to the migration of ungulates and consequently reduce the viability of the ungulate population. It can also intensify the mortality rate due to ungulate-vehicle collisions (UVCs). Yearly mortality incurred by the ungulate-vehicle collisions is little compared to road accidents worldwide. However, due to significant losses through property damage and ungulate population, destruction in transport infrastructure, human injuries and fatalities as well as in socio-economic terms, UVCs have become a significant road- safety problem in Canada, USA, Japan, Sweden and Finland. Thus, several studies have been carried out on this topic; unfortunately, the methods developed as a result of the studies could not successfully reduce the ungulate-vehicle collision due to poor decision- making analysis. It was therefore attempted to design a Bayesian decision model and analyze the digital pattern of adaptive lightening system (ALS) to predict its implementation in Lahti, Finland. The Bayesian model had the objective to analyze and validate the probabilistic efficiency of ALS in reducing the number of ungulate-vehicle collisions that lead to death, injury, property damage only and total estimated damage. The Bayesian decision model was conducted in the HUGIN software platform developed by Hugin Expert A/S in Denmark. Firstly, variable selection (discretization process) related to ungulate-vehicle collisions was piloted into nine groups of variables; driving behavior, traffic flow parameter, environment, road condition, road collision, ungulate populations and their migration, seasonal and reproductive behavioral change, food and vegetation change and other variables. Secondly, modeling and structuring of the Bayesian network were carried out. Thirdly, a predictive type of analysis was used as a protocol for the two sets of scenarios analysis. Finally, the model was computed with respect to research scenarios without ALS and with ALS. The result of the study showed that there was a positive correlation between the probability occurrence of “low UVCs” and “ALS”. In conclusion, the implementation of ALS will have a good impact on the minimum occurrence of UVCs. So, it emphasizes the need for further field-based test of ALS in order to approve its accuracy.