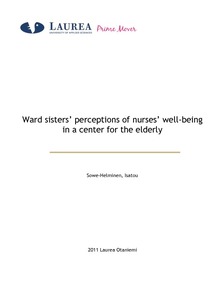 Qualitative research method was applied in this study. The data originated from a focus group discussion with five (5) ward sisters as participants working in a center for the elderly. The analysis was done according to content data analyzing steps and process of Elo and Kyngäs (2007), which includes; Open coding, Coding sheets and preliminary grouping, Grouping, Categorization, Abstraction and Category.

The finding shows 4 categories that arise from the data. These categories are; Professional environment and its ethics, Indicators of well-being, Structural factors influencing well-being and Human factors and well-being. The results revealed support as one of the major source for promoting and enhancing well-being at work which emerged from the discussion with two (2) to five (5) sub-categories (see table 2) identified based on the qualitative content analysis according to Elo & Kyngäs (2007). The findings of this study have clarified the ward sisters’ role in support of nurses’ well-being working in a center for the elderly. The findings from the qualitative content data analysis are presented in accordance to answering the research question formulated for this study. Ward sisters discussed well-being in general and also in their departments of work respectively.

One of the conclusions was that support among colleagues and from the leadership plays an important role in the well-being of nurses working in a center for the elderly. Ethics and trustworthiness were taken into consideration throughout the study process.