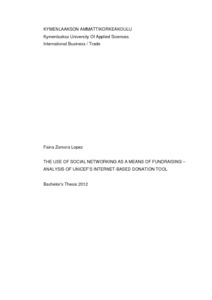 The thesis was executed as an assignment for UNICEF Finland, and the objective was to analyse the usage of an internet-based donation tool “Lipas” created by UNICEF Finland, and to determine whether social networking is beneficial for non-profit organizations as a means of fundraising. Traditional fundraising was compared to online fundraising by collecting funds during the Thirst 2011 campaign, and a questionnaire was used to ascertain the opinions of people who donated using Lipas.

Lipas was determined not sufficient enough for social networking use just yet as it can’t be directly put onto Facebook. It should be waited until the social network fundraising phenomenon evolves to the point where more of these types of online donation tools become more common. Social networking in itself was decided to be an excellent platform for online fundraising in general, and should be used by all non-profits.