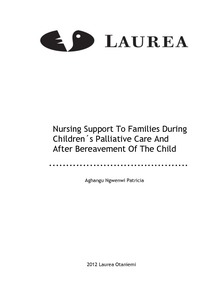 The purpose of carrying out this study was to contribute in creating awareness on the importance of nursing support to families in children´ s palliative care and also after the child has passed away. The methodology applied in collecting data in this review was a systematic literature review and was based on previous published studies such as journals and web searches. The articles used in this study were chosen based on the fact that it`s content answered the research question and were analyzed using an inductive analysis method. The total of articles used in this review are N=6.

The results of this study adopted from the chosen articles describe the type of care nurses do provide to families of children undergoing palliative care and it also describes the continuity of care after bereavement of the child. The findings were grouped into grouped into four categories, Family centered care, Communication as an important tool, Involving families in the caring team, and encouraging families in dealing with bereavement of the child. All four categories have sub-categories that is well described from pages 16-23 of this study and all four categories and their sub categories were titled; the process of continues nursing support to families.

The findings reported that Families need nursing support to be able to cope with the palliative care process, the changes it brings to their lives and how to deal with bereavement of the child. Every department in the nursing field needs continues development through innovations and children´s palliative care and the support that nurses provide to families during this period is no exception. Nurses need to get involved in research work so as to contribute in developing the phenomenon.