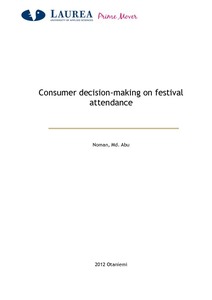 An email survey was conducted for this study and quantitative techniques were followed for analyzing the data. The survey discovered the most important reasons for cancelling a festival attendance such as unsuitable festival date, friends’ non-attendance. It also helped identifying the influences or motivators for attending a festival such as festival date, festival line-up, and friends’ attendance. Consumers’ early and late ticket buying ratios were also discovered by the survey. Based on the survey and theory, the consumer decision making on festival attendance was conceptualized and finally some ideas of features for the festival planning tool were gathered.