Sharing knowledge through the initiating process 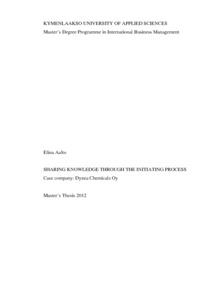 The study deals with the initiating process in the field of Human Resource Management, where the familiarizing and task orientation is seen as a complete package. In this study, the initiating is perceived as a tool for developing organizational learning as a whole and strengthening organization’s safety culture, since the process safety is playing important role in chemical industries. The study calls for dialog modeling of the process emphasizing socialization and human relations in the work community.

The present study represents a case study in qualitative research examining initiating practices in the case company during the times. The data were collected through interviews among recently employed personnel and by the researcher’s own observations during the summer job. Small survey was also made in order to add experienced personnel knowledge on personnel structure, while many have made long careers in the case company and as the organization will be facing the generation change in the near future.

Modelling of the initiating process results from the study. The purpose was to increase newcomer’s knowledge and understanding beyond individual tasks, increase visibility of the safety issues and ability to modify the initiating plan according to individual skills. It will ease the newcomers to integrate the group, adapt oneself to the people and the job. Organization will benefit from having an effective employee; an active and committed member of the group. As a result, a learning organization understands and respects individuals regardless of years of experience.