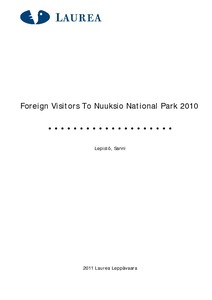 The purpose of this thesis was to examine the conceptions that foreign visitors have of Nuuksio National Park in terms of the park area and its service facilities, as well as to define the major differences between the park’s foreign and native visitors. This thesis was executed in co-operation with Metsähallitus, the owner and administrator of Nuuksio National Park, which is interested in receiving more in-depth information on foreign visitors and their visitor satisfaction. The results of this thesis will enable Metsähallitus and nature tourism entrepreneurs to provide services targeted at the foreign visitors.

Nuuksio National Park is situated in the province of Southern Finland, in the Uusimaa Region. Its exact location is in the town of Espoo and the municipalities of Kirkkonummi and Vihti
with an area of 45 square kilometres. In 2009 Nuuksio was rated as the third most popular national park in Finland based on numbers of visitors. Eight percent of Nuuksio’s visitors are foreigners.